An Opportunity To Redesign The Workplace

Staff in the organization’s offices throughout New Zealand found themselves at the frontline of not only managing disrupted workplaces, but also being amongst the first in the world to return to work.

Throughout the COVID-19 crisis of 2020, the alignment of technology and communication was to prove essential in connecting with a workforce operating in multiple locations across the country.

Michelle Littlejohn, Communications Manager, explains: “COVID forced us to embrace a more flexible model of working, and to do that we needed to step up our communication channels really quickly.”

Demands on staff are high in fast-paced corporate environments like KPMG. Keeping staff informed and engaged during disrupted and unsettling times was a challenge for Michelle and her team – but also an unexpected opportunity.

Like other countries across the world, New Zealand swung between states of lockdown and partial return to work. KPMG’s internal communications formed a crucial role in business continuity throughout this disruption. Leadership needed to keep staff informed of important information and details on the organization’s current COVID-19 response.

But equally essential was protecting employee wellbeing and ensuring staff remained engaged with the organization and their role. SnapComms provided an invaluable platform to achieve this, according to Michelle.

“We used Screensavers to back up the government messages around health and safety, encouraging work-life balance and promoting our EAP (Employee Assistance Programme) services, but also to remind people to be kind. This messaging has been a nice way to keep that colorful, fun, interactive vibe going when people aren’t in the offices.” 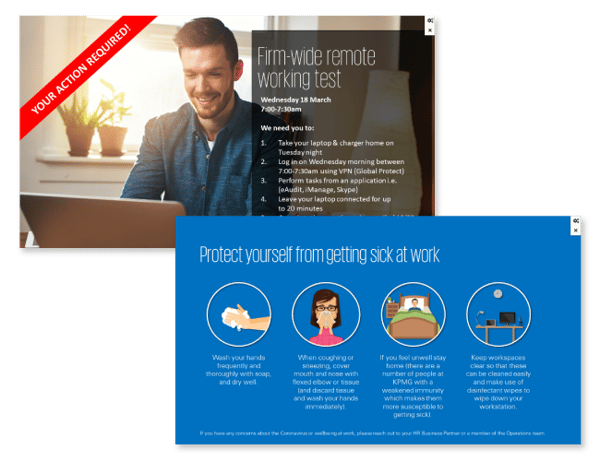 While the world continued to be affected by the increasing severity of the pandemic, keeping their staff engaged and up-to-date were key concerns for KPMG. Messaging needed to both motivate staff and address key issues like productivity and protecting against damaging cyber security breaches.

But how would the organization fare when lockdown was lifted and employees returned?

A fast government response coupled with geographic distance meant New Zealand was one of the first countries in the world to overcome COVID-19 and have the option to return to centralized workplaces. That meant many global organizations were turning to New Zealand companies to hear their stories of return to work and adapting to the new workplace trends.

A successful transition was important for KPMG to maintain the momentum built up during remote working, and to ensure the benefits they had accrued would be carried on.

Split working models were introduced, where at any given time half the KPMG staff were in the office and the other half were working from home. SnapComms played a key role in promoting the new process where all staff had rostered weeks on and weeks off. 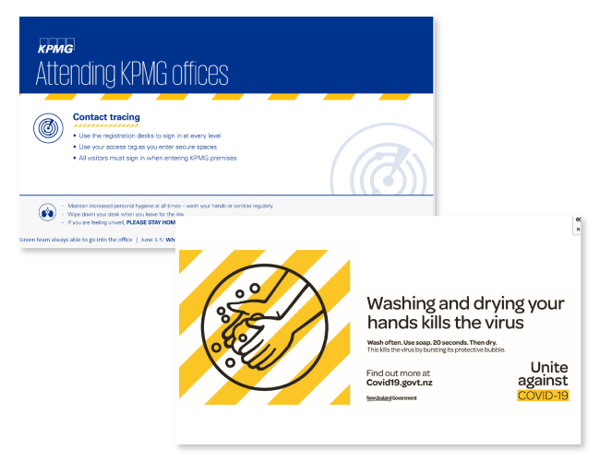 Scrolling newsfeed-style Tickers were used to notify staff whose week it was. Promotional Screensaver messages reminded them of what was permissible and what wasn’t during their week.

Training and other events were an integral part of KPMG’s efforts to keep staff connected, and another area where SnapComms helped drive results. “If we supplement emails and calendar invites with Screensavers, we’ve seen event attendance triple, even quadruple”, says Michelle. “It’s been really fantastic.” 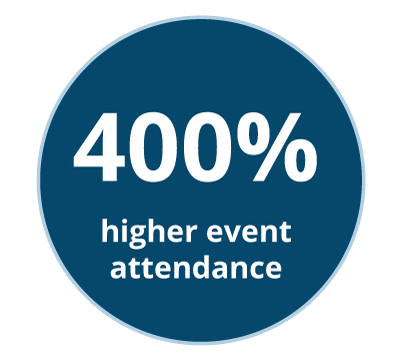 Leveraging modern communication tools in this way allowed KPMG to seamlessly transition between different modes of working. It also meant that many of the improvements developed out of necessity during lockdown, were sustained longer-term after returning.

“We’ve managed to keep a lot of the good habits we formed during COVID,” believes Michelle. “For example, leadership communication had to increase because of COVID, and we've managed to keep that increase going, which is something that staff have really appreciated.”

If the goal during remote working was to survive, then the return to work was the opportunity to thrive. Internal communications provided a strong impetus for this. So what was the catalyst for this at KPMG?

The SnapComms suite of highly-visual channels were ideally-suited, as Michelle recounts. “Technology is key in communicating with people, so the fact that you have a technology suite of tools is fantastic.” 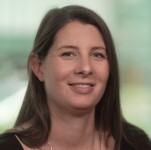 Technology is key in communicating with people, so the fact that you have a technology suite of tools is fantastic.

The results are clear in higher staff awareness and engagement. “People are understanding the value of communications more,” she says. “It’s not just staff seeing an email and thinking ‘I'll read that later’. Now it’s more like ‘that's something I need to know right now’. And that's continued.”

It’s clear that the COVID-19 lockdown has presented unexpected opportunities for KPMG, and helped them leverage internal communications to improve their business operations. So what were the key lessons learned – and how can these benefit other businesses just beginning their return to work journey?

Lessons Learned And Looking Ahead

A sense of guarded optimism pervades businesses across the world as they prepare to reopen their doors to centralized working. As their business environments have evolved through 2020, they’ve recognized the value of staff communications that are flexible and adaptable.

And what advice would she give to management teams embarking on a process of returning to work? “You can't overcommunicate, and everybody's going to want to absorb the information in a different way. So the more channels you can use to support your messaging, the better.”

KPMG have emerged from the disruption of COVID-19 as a success story in business resilience and employee wellbeing. Their internal communications throughout the year ensured an engaged workforce invested in performing at their best.

Now in the new world of work, KPMG are ideally-placed to maximize the lessons they’ve learned in the future. And SnapComms will continue to be a key part of their communication strategy – helping keep their staff informed and engaged.

SnapComms has given us a way to remain connected to our staff while they’re remote working by providing visual communication channels that reinforce the fact that KPMG and our leaders are still thinking of and caring for our staff.

Want to See SnapComms Internal Communications Tools for Yourself?

Send a brief description of your communication requirements, and we'll get back to you with a guide price!